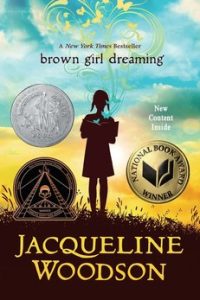 Reading Level: Grades 4-8; Lexile Level 990L; Accelerated Reader level 5.3
Interest Level: I would say the interest level for this book is grades 6th-8th and up. There is nothing too “mature” discussed in the book, I just think 6th grade and up would understand it better than the suggested reading level of grades 4 and up.

Synopsis: In this book, author Jacqueline Woodson uses verse to tell the story of her childhood. Woodson explains what it was like to grow up as an African American during the 1960s and 1970s. Jacqueline and her siblings move from Columbus, Ohio to Greenville, South Carolina to live with their grandparents. Being the south, there is still racism and segregation, but there are also white people that treat Jacqueline and her family like actual human beings. Eventually, Jacqueline’s mother moves the children up to New York and along comes a new baby brother. The reader is also told the story of Grandpa Gunnar (Jacqueline’s grandfather), who is a heavy smoker becoming sicker and sicker over time. Eventually, Jacqueline and her best friend Maria begin learning of Angela Davis and the Black Panther movement. Brown Girl Dreaming was a National Book Award winner in 2014, a Coretta Scott King Award in 2015, and a Newbery Honor book in 2015.

Personal Reaction: I must start by saying that I am not a fan of poetry. This book however, was beautifully done. I loved the imagery Woodson brought to life through her writing, it added a captivating element to the book. I listened to this book being read by Jacqueline Woodson, and I also read it, and both ways were absolutely wonderful! The poems all flow together so nicely that you seem to get lost and almost forget that it’s poetry at all (especially during the audio!). If I had just listened to the audio, and not researched the book, I would have never guessed this was written in verse. I just thought this was an interesting, and amazing, way for Woodson to tell her story. I think this book does a wonderful job of showing that obstacles do not have to hold you back. Woodson grew up in a time where her race played a huge role in life, but she did not let it stop her from doing the things she wanted; she went on to be an award-winning writer.

Recommendation: I would recommend this book to any one that is struggling with poetry (or claims to HATE poetry). The very easy-to-read language and flow of the book allow for Woodson to tell her story in a unique way that doesn’t overwhelm the reader with hidden meanings. This book would also be a great way to begin an introduction into the civil rights era and topics like segregation and oppression.